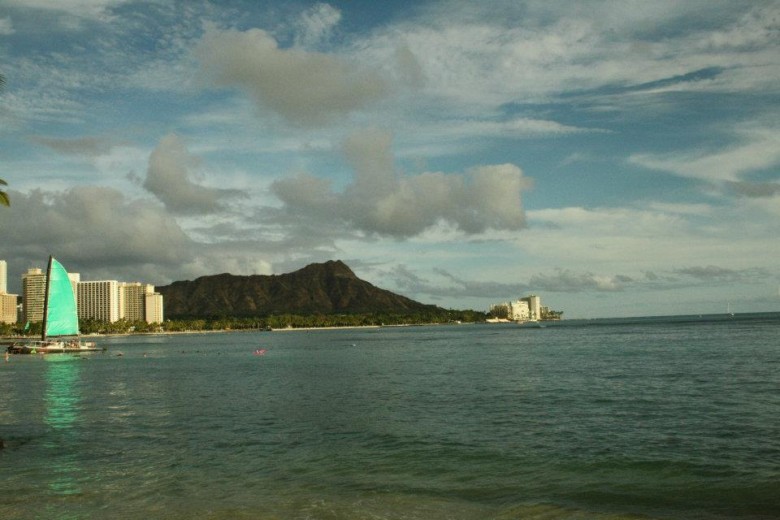 Hawaii, much more a pearl than a harbor

My wife and I had this master plan of going on an epic vacation before we start having kids. We had this crazy idea of having the ultimate trip where it would all boil down to a single climatic point, or in other words, 26 days of everything we wanted to do as non-parents, in a place where it could be done.

Generally speaking, we couldn’t have selected a better destination than the United States of America. One might debate against it being the best place on earth, but to us, it was and still is.

And so, we spent 26 days traveling between New York, Hawaii, Las Vegas, Los Angeles and even some Toronto time on the way back (to visit some dear friends).

Living up to expectations, especially this high, is very hard, but it actually happened. I feel it’s safe to say that our U.S. pre-kids vacation was versatile, alcohol-soaked, tasty, relaxing and generally unforgettable.

Since most of you have been in most of the places I’ve mentioned, I would want to focus on the place that I personally see as the highlight of the trip: 15 days in the magical islands of Hawai’i.

For those of you who didn’t know: Hawaii was officially declared the 50th U.S. state in 1959 and so it combines pristine, breathtaking nature with modern standards of a western country. And when “east” meets west, in this case, the fusion results in greatness. We actually visited 3 of the 4 main islands (Big Island, Maui, Oahu. Didn’t have time for Kauai).

Let me tell you just a bit about our experiences in the islands of Hawaii:

So when we landed in Oahu after an 11-hour flight from JFK we expected Polynesian dancers to wait for us at the arrivals hall with a Hula dance and the famous flower necklace. I think it’s safe to assume that the overwhelming fatigue invoked a somewhat unrealistic reaction to the sight of  just a regular airport with a regular welcome. When arriving directly to Ohau, things seemed a bit plastic at first, and you think… well… this is not what I was promised!

But then we slept for 16 hours, took a jeep and wandered around the island and got to know the hidden gems and magnificent scenery of Oahu. It’s probably not the ideal island, but it definitely set us up for the good that was about to come.

With a good-night’s sleep and a fresh perspective on what Hawaii is, we dwelled Honolulu, Oahu’s largest and main city, and kinda liked it. there was this unique blend of local and western, I’d say 30/70 respectively but still very islandy and low key, for a (sort of) metropolitan area.

There was one particular restaurant called “Udon” that we really loved. it projected “fast food” in its appearance but the food was absolutely phenomenal. so great that on our short stop back to the mainland we took the trouble of riding back to the city just to visit that place again. I think the name speaks for itself so I don’t really need to tell you what they serve there.

One more thing that is noteworthy is Pearl Harbor. If you’re unsure whether you should take the tour or not, I say – go for it. As a veteran solider who experienced hands-on combat, I found the experience humbling, emotional and overall very much educational (and of course, very interesting). For those of you who are concerned with the costs, you pay $10 max (most of it is actually free) from what I recall, so no biggie. 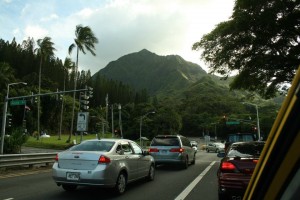 Off we go to Maui!

Let me start by saying: Maui is the most beautiful place I’ve been to.

It’s a rather small island, with its southern part almost completely secluded from the rest of the island (limited on-road access).

But sometimes, size really doesn’t matter. We stayed in a nice little town called “Kihei”, just 15 minutes driving distance from the capital, Kahului. There’s very basic nightlife in Maui, but enough bars and places where you can experience a Luau (not my cup of tea).  We actually rented a condo in a compound with a pool, DIY BBQ and other amenities. I personally recommend it. The condo cost us $680 for 5 days and had everything we needed, including a well-facilitated kitchen, comfy bed, a couple of boards, a living room and a small balcony. We bought groceries at the local Safeway and had a blast.

You need to realize that in Maui, much like the rest of the island, chances of rain are always high, no matter the season. but no worries, after an hour or two, it will clear up again and you’ll be able to go back to what you were doing (unless the skies are cloudy in which case you’re screwed 😛 ). 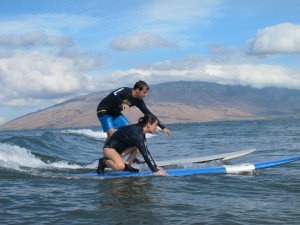 Welcome to the Big Island

Saddened by leaving Maui, we came to the big Island, with absolutely nothing set in advance: no car, no hotel, basically a computer and Starbucks Wifi.

We decided to be wanderers and circle the island (as it was rather big, hence the name) over 5 days.

The more popular local airport (out of 2 overall) is actually adjacent to the City of Hilo, to the east of the island. We’ll get back to it. I was hot for a Mustang, alas even tho I had a sweet deal on it, had to settle for a Chrysler Sebring (temporarily!). We drove up the north shore, and reached the town of Kona by nightfall (almost the exact opposite to the west). Kona is probably the most lively town on the big island, with excellent oriental food, some bars and a few VERY nice beaches just a bit up north. The two most prominent ones are Makalawena (A bit of a trek to get there) and Maniniowali which is family friendly. We spent 3 days in the Kona district, traveling down south and back, and then, finished with two somewhat rainy days in Hilo.

The good news is, after 1 day of having to put up with the Sebring, the agency had managed to find me a convertible ‘Stang and life was good again.

Here are cool things to do, counter-clockwise, starting Kona:

At Hilo, we mostly sought shelter from the endless rain showers, however we somehow managed to visit Akaka and Twin falls. Not the mighty Iguazu falls, not even Niagara, far from it. just a stream of water falling 500ft. down to a pond. Only if you have time, seriously.

We couldn’t explore most of the island in just 5 days, so there are places we skipped, like Mauna Loa and Mauna Kea (2 huge dormant volcanic mountains) and other wild places in the north, but I think it’s safe to say we did hit the nicest places.

We started our Journey back to the mainland with a 1/2 day layover in Oahu, where we heard the sad news about Steve Jobs’ passing. It’s incredible to see the admiration and respect this man had earned all across the globe, even in remote places like Hawaii (yes, I know it’s a part of the U.S.A, but still…), as the local Apple store was temporarily turned into an improvised memorial site, with the famous flower necklaces, candles and signs in his honor. We did manage to grab another bowl of Udon just before taking off, and just like that… our Hawaiian vacation was over. Till next time… 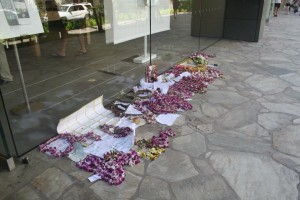 In conclusion, Hawaii was kind to us. it was tasty, diverse, wild, relaxing, peaceful and beautiful. They definitely earned an ambassador, even two.

Legend has it that our older son, Lavi,  was conceived in Maui… so the island definitely gave us the best farewell present possible.

There’s another “secret” island in close proximity to the west of Kauai, called “Nihao”. This island is closed to tourists and one needs to get a special certificate or invitation in order to visit the island. I wonder how long this would last. Good luck getting in 😉