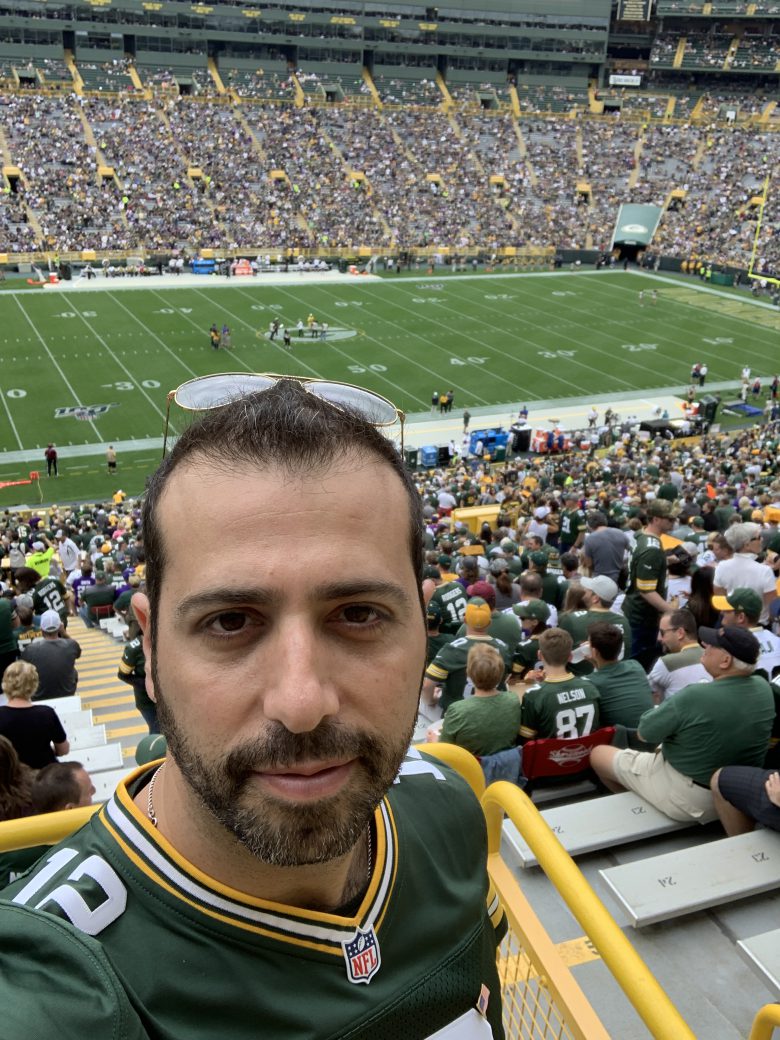 It’s been a loooong time since the last time I’ve written here.

Since my fanbase doesn’t even consist of my mom (let alone other people who aren’t obligated to love me and thereby everything I do), I reckon you weren’t wondering where I had gone.

Well, lots of places. But today I’m here to say that I have many things to say about my rediscovered love for the Packers (yes the NFL’s Green Bay Packers) and my thoughts, that may be somewhat contrarian to veteran football fans, more so veteran Pack fans.

A quick history rundown: growing up in Israel, I was exposed to the Packers in the mid-1990s, right around when Brett Favre started becoming a thing.

I liked the colors and the team, and so I became a fan. Not hardcore by no means, but a fan nonetheless.

Fast forward to nowadays, I finally paid my first visit to Lambeau Field this season, and for a big home-opener against no other than the Vikings. It was an entertaining match that ended up with a big win and I was super happy with my break-in experience, and it reignited my passion for football and for the Packers.

I listen to a lot of Packer podcasts. Between pessimistic to optimistic, everybody is (not) talking about a team that is in the process of rebuilding. Veteran fans (somewhat) forget that it’s coach LaFleur’s first-ever season as a head coach and many of the players are new to the team, and some are just new in general. Players like Za’daruis Smith who’s an explosive outside linebacker has only joined the team this season, and young & promising players like Rashan Gary and Darnell Savage too. Yes, we have some veterans and a couple of superstars you all know, but this general mosaic has been shuffled and rejuvenated compared to the McCarthy team, which is highly noticeable in many aspects on both sides of the ball.

Having said that, this team is much more prone to being outplayed, outcoached, and caught off guard at this time. So, yes, having a player like Aaron Rodgers on the team is priceless, and despite being in his mid-late 30’s, he’s still a winner and a game-changer. But still, this team has overperformed compared to the relatively new team, and while people say we all had wished for an 8-3 start, none of us thought it just may have been the making of a big team, potentially, not a big team at this very moment, yet. It is not a Rodgers-dominated team. It’s a team with a hall-of-fame QB that understands the game better than anyone, but more so, understands his role in this current team.

The Packers are not built to win the SuperBowl, heck, not even necessarily to finish at a favorable position for the playoffs. They are maximizing their situation at the moment and they still have a shot at getting a nice season overall. Those who say we are frauds are dead-wrong. The Packers never defrauded anyone, they were just catching more breaks than expected of a new team, and played quite well on occasion. But a team that gets DESTROYED for no obvious reason (let alone twice), while being considered a “contender” otherwise is the sign of work in progress and naivety that has to go away at some point.

I still think people are impatient with some of the players and should let this team evolve into better play calling, more “bread-and-butter” plays, and finding their rhythm in general. It hasn’t happened yet, doesn’t mean it won’t happen.

Yes, Green Bay is missing a couple of key players, more so, more playmakers that can be go-to’s in case Davante Adams and/or Aaron Jones are heavily marked. The newcomers like Lazard, MVS, and even Geronimo Allison ought to gain more confidence and catch balls thrown at them. We are likely missing, for example, one powerful tight end on the O side (OMG Kittle…) and possibly a powerhouse corner on D (OMG Sherman).

I really do think that, combined with some milage for LaFleur and his coaching staff, is all it takes to make up a decent contender in the coming years, at least until Rodgers starts his final decline (which I believe he hasn’t yet, at least not meaningfully so). Just looking at Tom Brady makes me think people need to consider retirement before they can’t really play anymore. But that’s another story.

Classic bad start that led to losing momentum, and little mental capacity, is the making of any young team. You can not expect Aaron Rodgers or any other veteran on the team to make the difference when every trick on the book fools your team, you really can’t. Add some bad calls by the refs that weren’t challenged: Rodgers, I reckon, did not fumble. He was brought to the ground and only slightly after it had gone loose. Also, the big pass to our version of Jimmy G (Graham) was a CATCH. he clearly took 3 steps with the ball before hitting the ground. A challenge at 13-0 on the 25-yard line could have changed things. Not to make excuses, Packers would have likely lost anyway, but at least the game could be a bit more competitive.

So, when you’re a new team, these things would break you. The Packers can still determine their own destiny, and you know what? I think this season is still relatively going to be good. There are too many better teams at this point (Pats, Ravens, Seahawks, Niners, Saints…) for me to think we could get away with the trophy this year, but I am nonetheless very optimistic about this team, granted that they can hold on to current pillars on both sides of the ball (e.g. Smiths, Clark, BOTH offensive blockers, Adams, Jones, and of course, Rodgers). My gamble is that we finish the season 12-4, and we get to the playoffs as 3rd seed.

Other than that I don’t expect much, but I am looking forward to the years to come under LaFleur with a functional, occasionally vintage Aaron Rodgers.

See you (hopefully) after the next game.