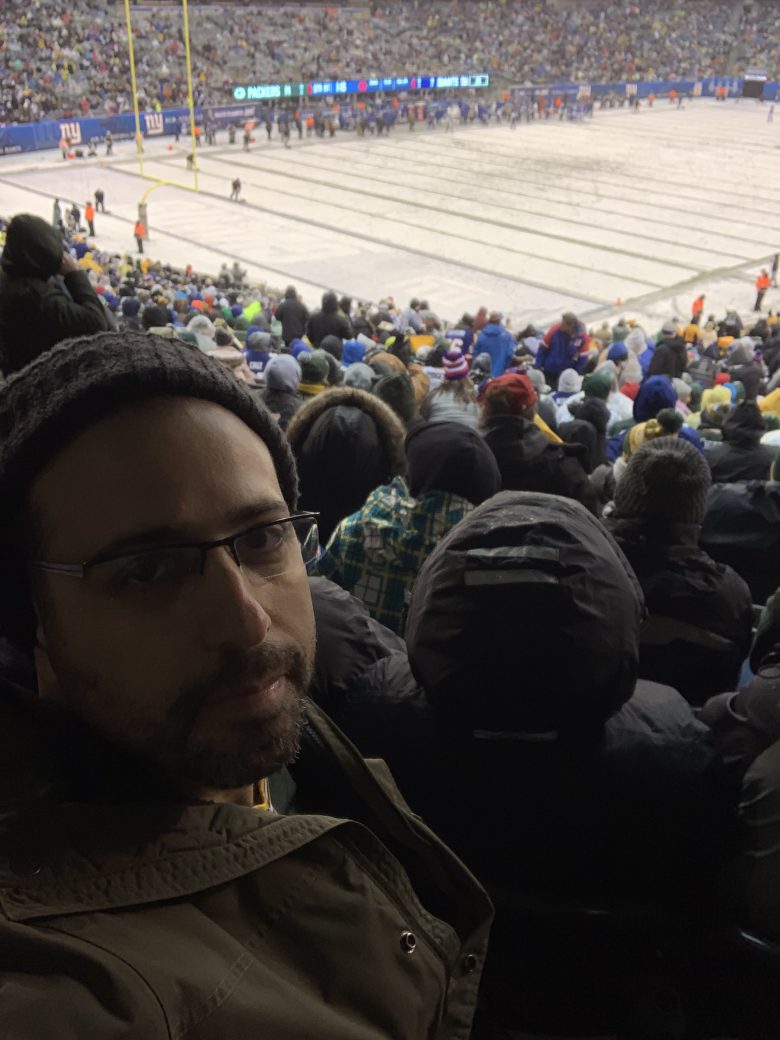 I’m really going to try and make an effort to write my thoughts after every game. Or at least every few games, I hope.

For this one vs. the Giants, it was quite special for me, mostly because:

I don’t think there was a single person at Metlife stadium who was expecting a Giants W, but I will say that with the Giants’ tradition and brand name, their fans (and perhaps rightfully so) are still sarcastic about their team in a way that clearly shows how they actually do expect them to perform. That is, unlike the Jets fans, for example, who are always on the lookout for when they’re going to be bitten in the ass or fumble, yet again.

I will say, all things considered, given this crazy week of upsets (Redskins beat Eagles, Texans beat Pats, Bangles blow out Jets, Dolphins beats Panthers), overall, we came out on the right end of it. In the snow, no less.

The stadium atmosphere was fairly mild as far as cheering, which is sadly common for Giants games, but you can still feel that Giants aura when at the stadium, that comes with their history, tradition, titles, and gigantic superstars. At some point, after the Packers have secured the game, it seemed like most Giants fans have left and Metlife turned into quasi-home field for the players and what I would assume to be 15,000 Green-and-Gold Go-Pack-Go fans.

My theme for this game was “no news”. The Packers are still the same team from last week vs. SF, except the rival this time was far inferior in almost every position. Well, not almost. Every position. This means I refuse to overly relish the nice W they put on the charts to go 9-3, same as I refused to submerge myself in a sea of depression post-SF. Still, I think “no news = good news”, because if our expectations are set correctly and realistically, we’re worth reaching playoffs but most definitely not a Superbowl team. So, I think blowing out the Giants on the road in the snow is going to help the players regain their momentum and confidence, so they don’t mess up the relatively easy upcoming games (Washington, Chicago, Detroit), and to allow themselves to withstand another L vs. Vikings at Minnesota.

Everyone is hyper-focused on stats, wins, this player, that player. That’s important. But don’t forget the big picture, which I will rehash again: the Packers ARE NOT a Superbowl team, but they CAN be, in the future. Hence, a near term (i.e. for this season) goal in the form of “reaching the playoffs” is not only tangible, but it’s also potentially a wonderful lesson for the less experienced Packers that need to get a taste of those playoff fights, the team as a unit, and not to mention LaFleur as a head coach and how the system is built around his philosophy.

Looking at the divisional and overall NFC standings, odds are not looking good for being a #1 or #2 seed with how good the other top-tier teams are playing (SF, Seattle, and NOLA), and so the likely path is that we win a wildcard spot, and hope to not get our asses kicked at one of those teams. And this is exactly what an impressive win over New York (and it was, especially the 2nd half) means.

I really believe with proper strengthening of both sides of the ball (D – cornerback/safety, O – tight-end/receiver), and with Rodgers+LaFleur aligning on strategy (as opposed to improv-as-a-strategy), and adding more creativity to quite conservative plays/schemes they’re running, we will have a top-end team for next season, and for as long as Rodgers can be useful (ehm… another Brady reference).

Also, I was very sorry to hear about Mason Crosby’s sister-in-law who passed away last week after a battle with cancer.

Mason is a special man and he went through a rough patch this year with his wife and sister-in-law both dealing with cancer, all-the-while maintaining incredible professional standards and having a pretty amazing season.

May she rest in peace.

Off to Washington! #GoPackGo!